Coho and chum salmon returns up 300 per cent almost immediately. 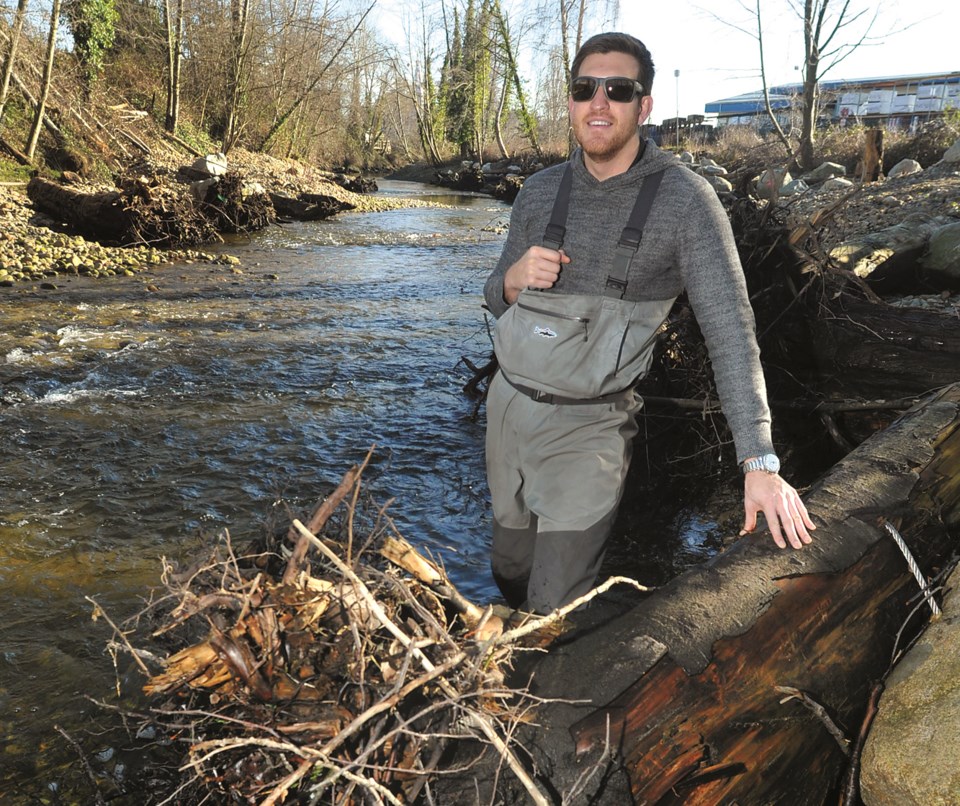 After all but disappearing from Mosquito Creek, salmon populations are returning in record numbers thanks to a habitat improvement project led by the North Shore Streamkeepers.

Keegan Casidy, the group’s president, grew up fishing in North Vancouver. Life took him to the Cariboo for a time but when he returned to the North Shore in 2016, he saw his beloved creek almost devoid of fish.

The last time a pink salmon had been spotted there was the following year.

“I used to run down with a fishing rod, prior to cellphones and things like that, and have some fond memories of very large fish in the creek,” he said. “I very quickly found out that the salmon population had declined to a point of almost extirpation.”

As the North Shore developed, the nature of the stream changed with more storm water washing away the woody debris and boulders where salmonids seek shelter, and compressing the gravel where they lay their eggs.

Casidy joined the North Shore Streamkeepers and started picking the brain of a local restoration biologist with experience in creek rehabilitation projects. The Squamish Nation was already ahead of him, having commissioned a study assessing the creek from First Street to the estuary. The Nation provided the report and backed the project. Casidy then raised the $250,000 required to transform the creek’s bank where it runs through the Squamish Nation’s community of Eslhá7an.

Some of the biggest funders chipped in between $10,000 and $25,000 including the Pacific Salmon Foundation, Seaspan, Neptune Terminals, CN Rail, Patagonia and the City of North Vancouver. It took more than three years and thousands of volunteer hours to get the project shovel ready.

Casidy said he was brought to tears when Squamish Nation representatives conducted a blessing, with drummers and singers who came to let the creek know work was going to begin. It took 11 days in September for heavy equipment operators to carefully place new boulders and 60 mature conifers with their root balls still attached.

The Department of Fisheries and Oceans, and the Streamkeepers began transplanting eggs from a hatchery to the creek in 2019. When the mature survivors return to spawn later this year, they will find the creek looking much better than they left it. But Casidy said he was astounded to see new fish moving in almost immediately.

“We already had coho salmon utilizing the structures that we had built,” he said. “That was pretty much the earliest we’ve ever seen them and they were in very good shape.”

Going back to 1995, the Streamkeepers had never counted more than six chum and eight coho salmon on Mosquito Creek. When Casidy did a detailed count on Remembrance Day, he found 21 chum and at 25 coho.

“So in both cases, you’ve got an over-300 per cent increase in population,” he said. “We were absolutely shocked to see how many coho and chum had returned.”

They’ve also since spotted the first steelhead trout on the creek in 21 years.

Casidy said it’s most likely the newcomers had strayed from their home creeks and rivers after they could detect the new trees and boulders on Mosquito Creek.

“They go, ‘Whoa, that smells really good. Let’s go check it out.’ And ultimately they decide, yes, this is suitable spawning habitat,” he said.

DFO is now planning to put in 20,000 pink and 20,000 chum eggs on alternating years and Casidy brims with optimism future returns will be in the hundreds of fish per year, over and above the wild salmon population.

“Looking forward, we can only expect larger returns,” he said.